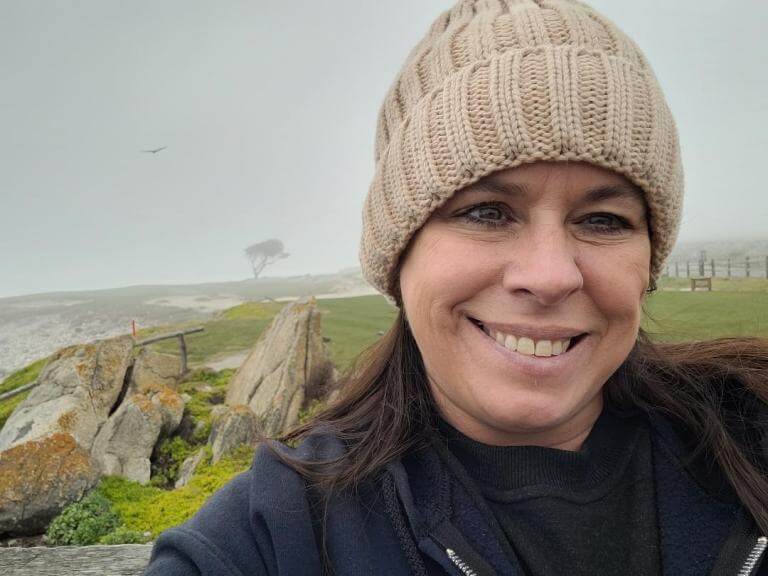 During Nurses Month, NurseChoice is proud to highlight one of our own travel nurses who is making a vital contribution while caring for her own health and well-being.

A little over 20 years ago, Christine Centers, RN, graduated from a Texas nursing school. But it wasn't easy: she was a young mother going through a difficult divorce. After graduating and receiving her LPN, she went to work full-time in a nearby OB–GYN clinic. But Christine soon realized that the clinic's schedule wasn't a good fit for a single mom.

So, she called a nurse staffing agency and started working per diem. The money and hours were better than her full-time job. She remained an agency nurse for about 10 years, working in the emergency department, long-term clinical care and home health.

When her children started middle school, Christine decided to go back to school to become a registered nurse (RN). She worked nights and attended classes during the day. It was just another challenge that she was able to overcome with hard work, sacrifice and determination.

"My mother was a truck driver, so hard work was instilled in me at an early age," she said.

In 2020, Christine was employed full-time as a registered nurse for a Texas county jail and worked per diem for a local hospital. Her daughter, Nicole, who had followed in her mother's footsteps, had just graduated nursing school and was in Seattle for her first assignment as a travel nurse.

Want to travel? You can work as a contract nurse with NurseChoice.

"When my daughter went to Seattle as a travel nurse during COVID, it scared me to death," said Christine. "She's young, and I couldn't be there to take care of her." 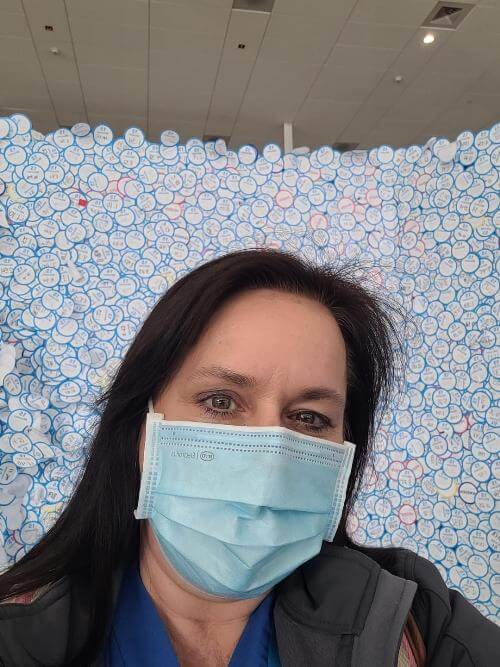 Christine was speaking from first-hand knowledge about the dangers of COVID as a frontline healthcare worker. She had contracted the virus while working at the jail and ended up out of work for a long time.

While Christine was considering her next steps, Nicole returned from Seattle and suggested that they find a travel assignment they could do together. So, in July 2020, mother and daughter traveled to San Angelo, Texas, where they worked together in a hospital COVID unit. After eight months of working with critically-ill patients, the duty wore on them, especially after Christine's daughter contracted the virus.

"We both needed a little bit of a change,” Christine said.

Toward the end of the assignment, she learned about an opportunity at the Kaiser Moscone Vaccine Center in San Francisco, which she saw as a less-stressful way to help fight the virus. She called NurseChoice recruiter Latham Staples to discuss the assignment.

"Latham is great, and I'm not sure I would have taken the assignment if he had not been so helpful," Christine said. "At first, we were going to the vaccine center in San Diego but had to change last minute to San Francisco. I knew nothing about the area, and he pointed me in the right direction and made me feel safe and comfortable while away from home."

A change of scene at Kaiser’s Moscone Vaccine Center

Christine had been working on the COVID front lines for months, but working at the vaccine center had a whole different vibe.

She has mainly worked as an observer, taking care of patients who might have side effects to the vaccine. She also fills in to administer the vaccine when needed.

"At the vaccine center, it's definitely a whole different atmosphere than what I came from," she said. "People are happy and smiling. They're thankful and very emotional at times. Some cry even before they get their vaccines, and some are saying we're the first people that they've had an actual conversation with in over a year. To hear their stories and what they've been doing for the last year is really humbling."

Early in her assignment, Christine said that dosage availability was so low that she took a week off. But inventory has since recovered, and the center was recently doing more than 7,000 vaccines a day.

"We are busy," she said. "The center is well-organized and well put together." 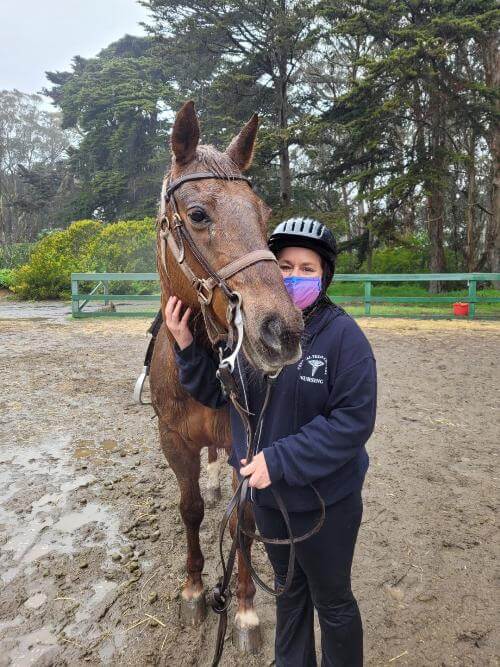 After working through the pandemic this past year, Christine understands the significance of nurses taking care of their own mental and physical health. But she also knows it can be a challenging task at times.

For National Nurses Month in May, the American Nurses Association is bringing more attention to the importance of this topic by deeming the first week of the month as Self-Care Week. Nurses are encouraged to focus on their mental and physical well-being, and to prioritize their own needs—which will also enable them to keep doing the vital work they do and provide the best patient care.

"When you're in a travel position, you might not have a lot of control of your schedule," Christine said. "So, when you do have personal time, do something that takes you back to what makes you happy."

For Christine, it's horses. Though working in downtown San Francisco, she has found a riding stable outside of the city that has become her happy place.

"Horses comfort me," she said. "That's what totally relaxes me. So, whatever that comforting force is, find where it exists, and just go do it. Don't make a habit of staying in your hotel." As part of her self-care routine, Christine is also careful to be sure she is well fed and hydrated at all times.

After her assignment at the vaccine center, Christine is looking forward to more travel nursing assignments alongside her daughter.

READY to try a contract nursing job? Just apply with NurseChoice and our recruitment team will get you on your way!