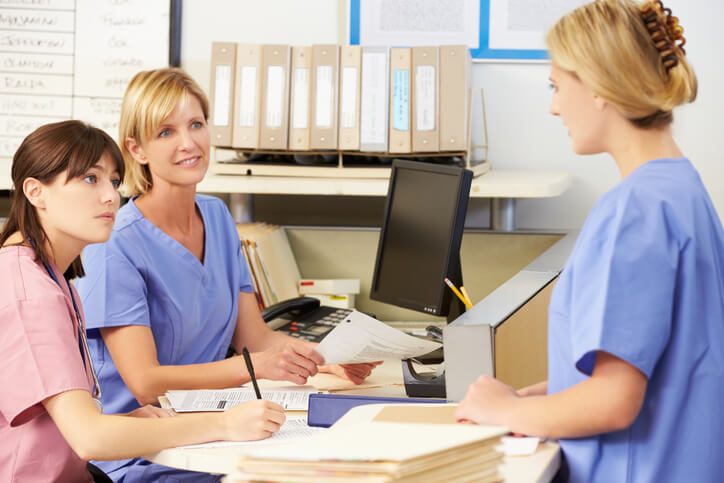 3 Dangers of Nurses Station Gossip--and How to Avoid It

Tittle-tattle, rumors, hushed whispers—call it what you want, but gossip can have an adverse effect on the workplace, especially for hospital nurses and those in working primary care. Best known as negative talk about an absent third party, gossiping at the nurses’ station can cause low morale and a host of other problems.

One of the fundamental principles of all communications, not just at a nurses’ station, is trust and respect, explained Connie Barden, RN, CNS, MSN, CCRN-K, CCNS, chief clinical officer, American Association of Critical-Care Nurses (AACN).

Avoiding the negative, dangerous outcomes listed below and shifting conversations to a more positive light can create an environment of transparency and strong employee relations. It can also help protect patient outcomes and satisfaction levels.

Whether the chatter is about a patient, colleague, supervisor or other third party, talking behind someone’s back can cause hurt feelings and other issues that can potentially damage a relationship.

“It’s important to create an environment that fosters effective and skillful communication and collaboration as outlined in the AACN Standards for Establishing and Sustaining Healthy Work Environments,” Barden said. “There are few places where the stakes are as high as in a hospital. Demeaning, belittling, and disrespectful gossip damages relationships, contributes to errors, and adversely impacts nurses, coworkers, and patients.”

2. Lack of Trust and Respect

“When there is negative gossip, it’s difficult for trust and respect to flourish,” Barden explained.  Both the person doing the gossiping and the person listening to the conversation can be perceived as untrustworthy for talking about someone who is not present."

Specifically, for skilled communication to thrive, Barden said it is important to center on three key areas:

“As in other aspects of life, it’s best to focus on taking the ‘high road’ with our conversations,” Barden continued.

“Ideally, if gossip exists, it should be focused solely on celebrating those around us and recognizing their contributions in a positive way. The litmus test for gossip should be, ‘Would you be proud to share what you are saying with the person you are discussing?’ Then it’s worthy of sharing as positive gossip.”

According to Becker’sHealth IT and CIO Review, employees disclosing patient information is the most common violation of the Health Insurance Portability and Accountability Act (HIPAA). In their 2016 list of the most common HIPAA violations, they explain that employees' gossiping about patients to friends or co-workers is a violation that can lead to significant fines.

Moving sensitive conversations to private areas and avoiding sharing specific patient information while in a public area such as the nurses’ station is a critical component to avoiding HIPAA violations.

Bur talking about patients isn’t the only problem. Speaking badly about fellow hospital nurses or other healthcare professionals and administrators doesn’t look good for your hospital or your unit.

Can Nurses Station Gossip Be Good?

It’s important to look at all sides of the “story,” especially when it comes to a sensitive subject like gossip. In fact, research has shown that some gossip may actually have positive effects on camaraderie within an organization, including the hospital setting.

According to a 2014 study published on ScienceDirect, “Talking Behind Their Backs: Negative Gossip and Burnout in Hospitals,” the researchers found that gossip can both hinder and help in a hospital environment. The whole issue is one giant gray area, with some data and anecdotal evidence showing gossip as beneficial, and others documenting its harm.

One of the study’s authors, Anthony Montgomery, PhD, an organizational psychologist and associate professor at the University of Macedonia in Greece, explained that, “Gossip is a way of communicating rules and establishing norms, it is informal and leads to sharing of information and risk.”

“Gossip can help to relieve some of the emotionally charged situations that occur in the multifaceted relationships with patients or other employees. Nurses often use gossip to express some of the deepest emotions about patients and fellow workers and gossip has been considered as a form of emotional support and a way to relieve stress.”

Replacing gossip with forms of more positive, inclusive communication is a great way to change the direction of a conversation that may be perceived as negative.

“I would argue that line managers need to be aware of the gossip that goes on around them, and use it as a way to take the 'temperature' of their unit/department,” Montgomery concluded.

“Obviously, not all gossip is relevant to healthcare management, but it can reveal what topics are not provided an appropriate forum for discussion (e.g., errors, near misses, inappropriate behavior, bullying).”

THE RUMORS ARE TRUE: NurseChoice has a great selection of high-paying travel nursing jobs.

APPLY TODAY to get started!

What compact nursing states are best for travel nurses? Check out our list of Nurse Licensure Compact states that offer travel nurses higher salaries, lower cost of living and better quality of life.

Contract Nursing MAY 08, 2019
Why Every Nurse Should Consider Travel Nursing in Colorado