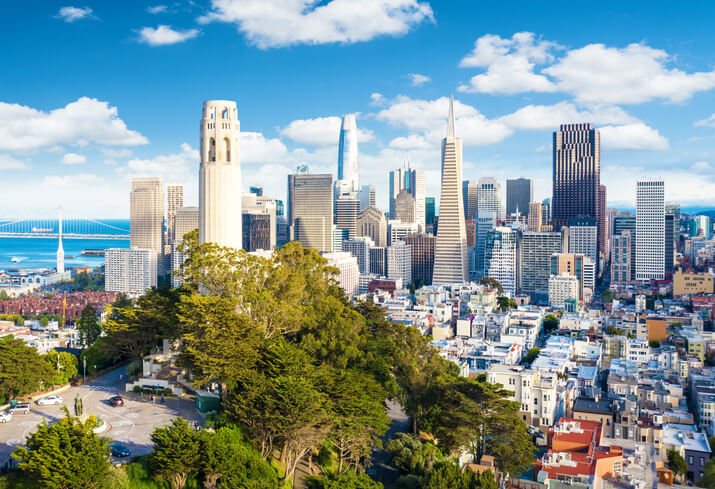 Luckily, there also are plenty of travel nursing jobs in California from which to choose, and many institutions have critical nurse staffing needs.

“I do believe there is a need for a lot of nurses in California, particularly for experienced nurses,” says Denise Boren, director of the School of Nursing at Cal State San Marcos in San Diego County.

“The average age of nurses is up there. Many were going to retire (around 2008), but then the recession hit. Many stayed on and those who were part-time went to full-time,” she explained. “Now there are going to be lots of retirements, and predictions are that by 2020, there will be a shortage again.”

So the opportunities for California nursing jobs are numerous, and one of the benefits of travel nursing is the freedom to choose assignments and locations. Other benefits include being able to live rent-free and have travel expenses reimbursed in this popular state that has a high cost of living. It’s like getting paid to travel here.

Here are some of the top cities to visit in California, which also have plenty of travel nursing jobs.

La La Land’s metro area of 13 million residents offers a plethora of travel nursing jobs and unlimited attractions and destinations, so make a plan. Take a bus tour to the most popular tourists areas, then discover the less-glitzy gems like the Bradbury Building; Griffith Observatory (includes a fabulous view of the iconic Hollywood sign and the LA basin); and Evergreen Memorial Park and Crematory with its compelling collection of residents.

Top-rated beaches are Santa Monica Beach and Pier and the contiguous people-watching paradise of Venice Beach. (Bring a camera and an open mind.) A quintessential LA experience: picnic dinner (BYOB) and concert at the Hollywood Bowl.

Down-time destinations: So many, but try Big Bear Lake and Las Vegas.

Both cities are located along Highway 111, which links every resort city in the Coachella Valley. A travel assignment in one is a ticket to all, best appreciated in the winter and spring months. Miss the snow? Just look up at the magnificently frosted peaks of San Jacinto (10,834 feet) and San Gorgonio (11,502 feet); take a thrilling gondola ride to the top of the former.

Spring brings its own brand of magic to the desert with carpets of wildflowers and blooming cactuses. The local ecosystem is on display at the highly-rated Living Desert Zoo and Gardens in Palm Desert, and everything Mid-Century Modern is touted during Palm Springs’ annual Modernism Week in February. Walking tours of Palm Springs’ lush Old Las Palmas neighborhood transports visitors to the bygone era of Frank Sinatra, Liberace and Elvis.

Located on beautiful Humboldt Bay in Northern California, this town has 100-plus Victorian buildings and a rich history. Other highlights: The Sequoia Park Zoo, Sequoia Park Forest and Garden, and the Humboldt Botanical Garden.

Down-time destinations: A gorgeously scenic drive north on historic Highway 101 (Redwood Highway) to the Oregon border, with plenty of interesting stops and viewpoints along the way.

Good public transportation (including cable cars) allows you to visit all the attractions for which the City by the Bay is famous: Fisherman’s Wharf, Golden Gate Park, Alcatraz, Golden Gate Bridge, Pier 39 and more. And some of the highest-paying California travel nursing jobs can be found here, and in the surrounding bay area.

These San Francisco Bay area cities are synonymous with Silicon Valley, ground zero of the tech revolution. But the area’s roots also go deep, including the Santa Clara Mission (founded 1777), and the Winchester Mystery House, with its secret passages and resident ghosts.

The boundaries: 10th and 11th streets between G and K streets.

That’s where it all happened in Modesto in 1973 when George Lucas filmed “American Graffiti” in this Central Valley town. In fact, this town’s real cruisers inspired the film. Maps tell visitors where all the scenes were shot, and Modesto celebrates its heritage every June with the American Graffiti Festival and Car Show.

You’ve never heard of Templeton? One of the benefits of travel nursing is discovering unknown jewels like this town of 8,000 in Central California. Templeton, a destination for antique shoppers, also is emerging as a notable wine producer.

READY to discover these and other great locations in California and the U.S.?

Contract Nursing MAY 08, 2019
Why Every Nurse Should Consider Travel Nursing in Colorado